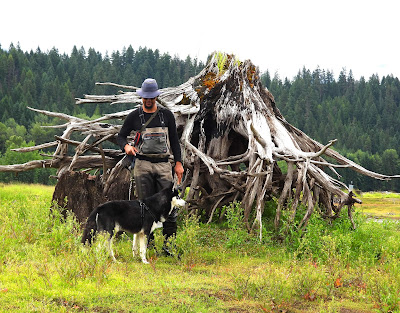 Of what a glorious stay our over night camping and fishing at Ross lake the sixty Kilometer drive up to the lake is quite beautiful once we got to the lake we where surprised Ross lake was not a lake but now a river rustling through the once lake it was quite the sight it's the first time in fifteen years that there was no lake apparently the park rangers Said the mountains hardly had any snow hence no run off. The fishing was wonderful at the lake the scenery breathtaking I caught incredible rainbow trout further up the river was fish where biting lots of enjoyment from a peaceful place I love Ross lake and it's surrounding Beauty 8/10 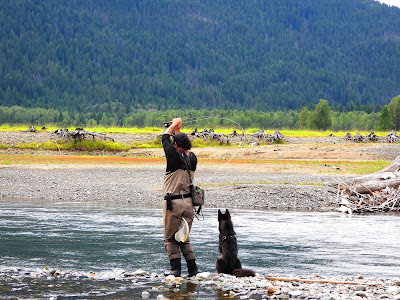 The picture perfect Skagit River is a trout fishing hot spot between July 1st and October 31st. Accessible by 2 wheel drive and located only 2 hours outside of Vancouver. The Skagit River offers anglers a dry and wet fly fishing for wild rainbow trout and bull trout. In this blog post we will cover some of the flies, lures and rod combos to help you get started. 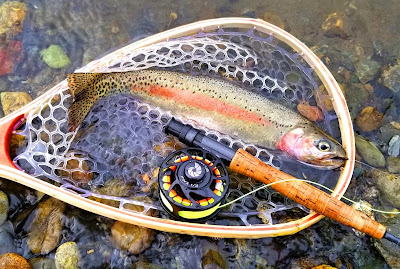 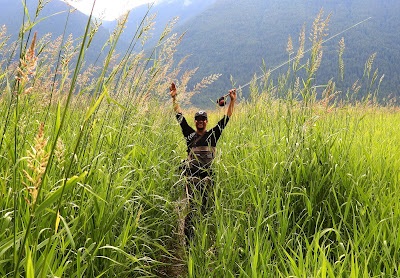 I must say, after this great adventure and only a couple hours from where I reside in the lower mainland, I will be back full force again and make many more trips in the years to come. 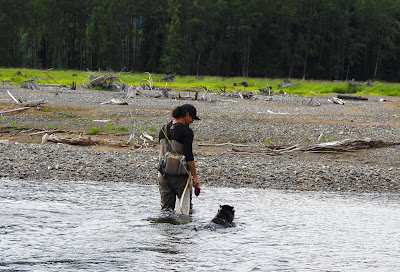 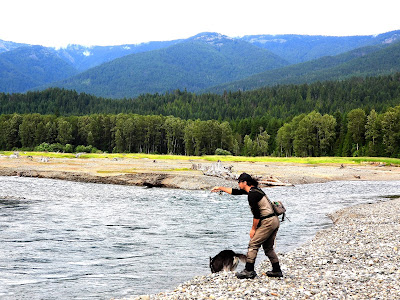 I have yet to see such a river which offers so many challenges but great ones at that, from wading chest deep to ankle high, the fish were in many areas, areas which most people would wade through or not think fish would hold in. There were also pools and tail outs on runs that were also a challenge to access. If you have a wading staff I would suggest bringing one just to be on the safe side, this will help you access many more areas on the river that might be a challenge to wade to alone. 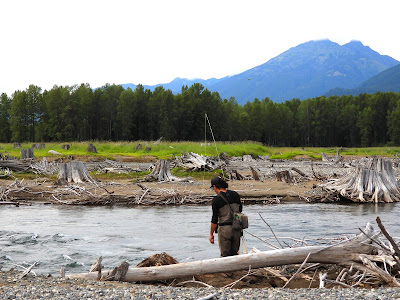 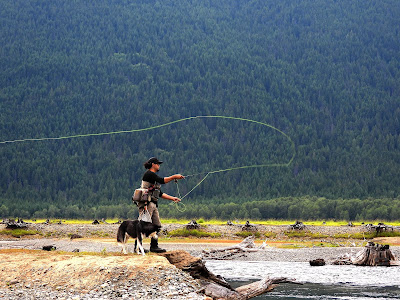 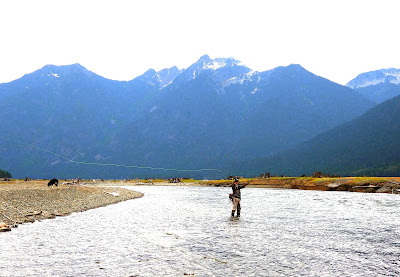 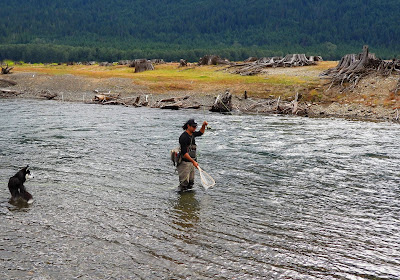 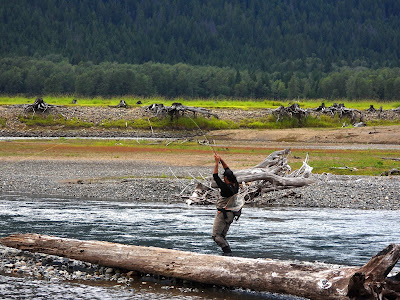 There is one thing which I haven’t covered yet, the Mosquito’s. Make sure to bring bug spray, we unfortunately we not allowed to have any fires due to the provincial wide fire ban but we managed them by bathing in some deep woods repellant and wearing sweaters and pants after dark. 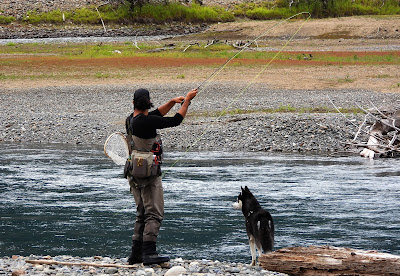 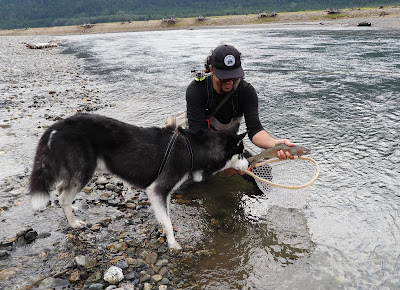 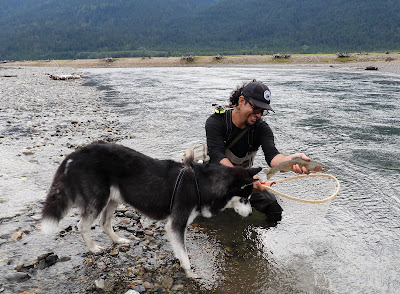 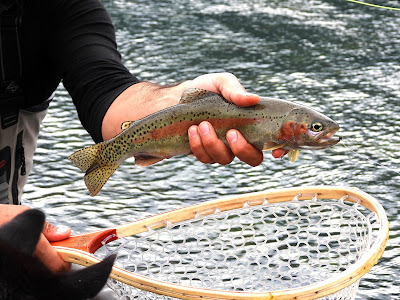 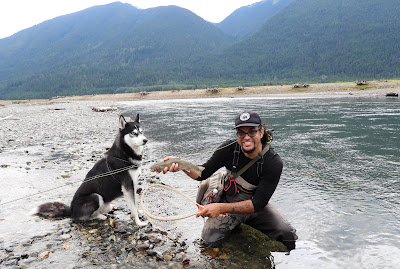 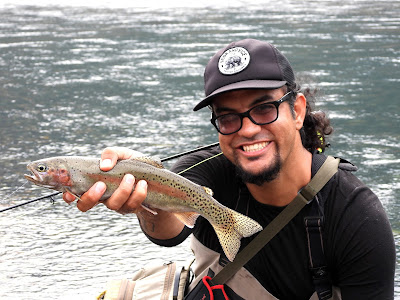 Certainly, there are many beautiful streams with larger and more challenging fish, and rivers with better insect hatches, but for sheer physical beauty, none can top the Skagit River. To have such a jewel so close to a major city is a blessing that all fly fishermen should treasure.
The Skagit River is a trout stream we almost lost. The British Columbia government signed away the water rights during World War II. For the princely sum of only a dollar an acre, Seattle City Light had the formal right to raise Ross Dam at any time and flood a further 10 miles of the Skagit Valley. British Columbia wouldn't have had even a lake out of the deal because during water draw down only an ugly mud flat remains. As it is, the so called Ross Lake Reservoir is nothing but a mile of mud flats and dead trees on the Canadian side of the border. 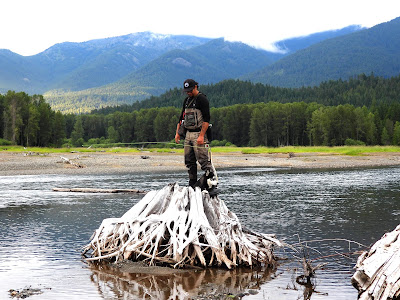 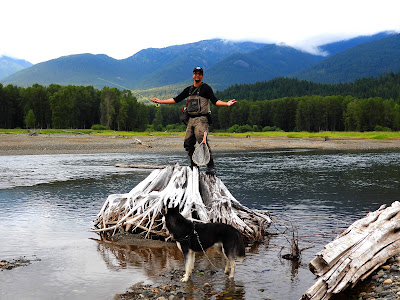 About 1965, Seattle City Light made its intentions clear that it intended to raise the Ross Dam. By that time many anglers from the Lower Mainland had discovered the excellent trout fishing on the Skagit. They began to petition the government to stop the project, but their cries fell on deaf ears. The W.A.C Bennett government cared nothing for the environment and thought only of development. Rape and Run was their motto as long as it created jobs. It wasn't until 1967 when our mass protest in the valley got newspaper coverage that the government finally listened. After that, negotiations continued for almost 20 years before a settlement was finally reached. An agreement was signed in 1985 where British Columbia would supply cheap power from its Columbia Dam system in exchange for getting our land back. Considering what we almost lost, the agreement was a steal. 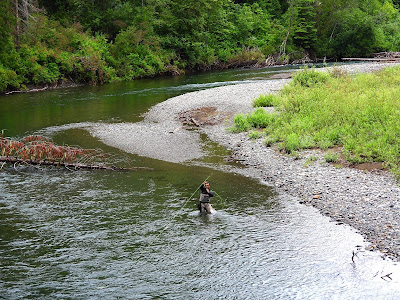 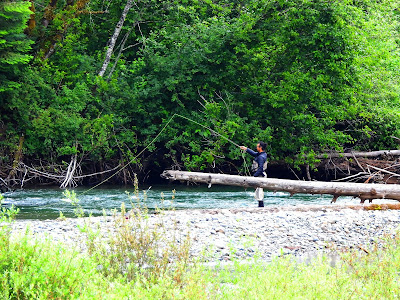 As a trout stream the Skagit River is priceless. It rises high in mountains of Manning Provincial Park and flows west until it runs headlong into Sumallo Creek that flows eastward. The two streams join at Sumallo Cedar Grove on the Hope-Princeton highway, then push their way south-west through a narrow mountain valley until spilling onto the glaciated flood plain that we know as the Skagit Valley. From there, the Skagit River joins Klesilkwa Creek and turns south towards the U.S. border and Ross Reservoir. As a crow flies, it is about eight miles from Sumallo Grove to the 26 mile bridge in the Skagit Valley and another 10 miles to the reservoir. As a river flows it is many more miles than that. 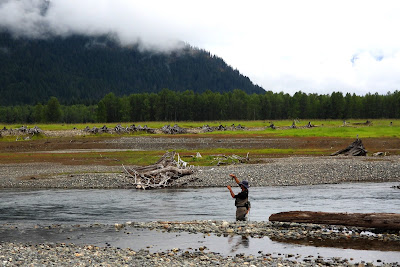 The upper Skagit is a mountain creek where it crosses back and forth across the Hope-Princeton highway. It contains only a few small trout. Sumallo Creek isn't much better and the fish are just as tiny. It isn't until several miles downstream that the Skagit becomes the classic trout stream that fly fishermen know and love. Fortunately, from Sumallo Grove downstream to the Skagit Valley the river has been protected from logging and is still in its natural state. There are no roads and only one hiking trail along the river. In the Skagit Valley basin, a gravel road parallels the river as far as the reservoir. Luckily, the road is far enough away from the river so as not to destroy its beauty. 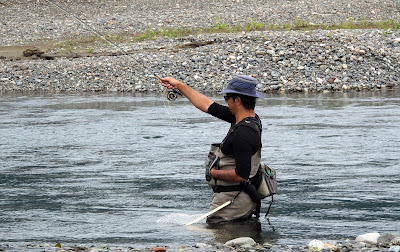 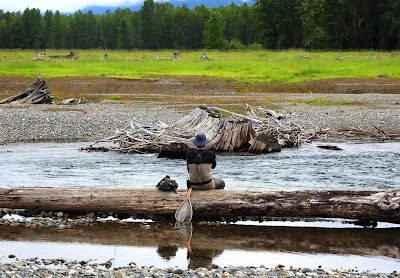 The Skagit from Sumallo Grove to Klesilkwa Creek, and from there downstream to the reservoir are like two completely different rivers. The upper river is contained in a very narrow mountain valley. It drops in a series of pools and rapids until reaching the mid-way point. Then it slows down into a series of glides and runs. The water is crystalline and the pools emerald green. There are a few log jambs, but for the most part the pools remain stable from year to year. In some places, huge trees form natural bridges over the stream. The conservatory section with it stand of large cedar and old growth Douglas fir trees is especially beautiful. Every fishy looking run and pool has its own resident trout. Anglers are rewarded by seeing the trout rise to a well presented dry fly. 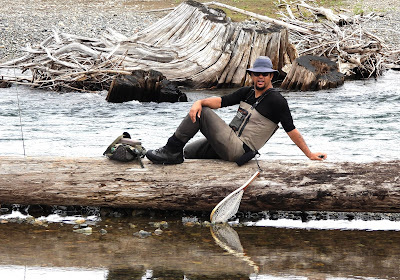 The Skagit from the 26 mile bridge downstream is a different river entirely. It meanders back and forth across a flood plain. There are long runs, wide gravel bars, tangled log jambs and deep slow pools. It is no less beautiful, just different. Where the upper river is too wild to run in a raft, the lower river enchants the river drifters. However, in high water beware! The Skagit River buries canoes every year in its log jambs. Even in the ugly mud flats near the reservoir there are good pools for anglers who don't mind the scenery. 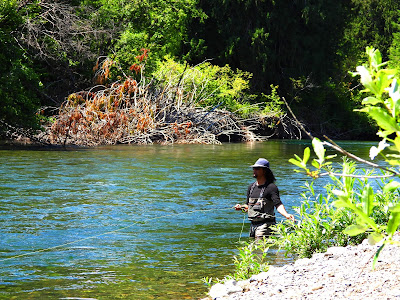 High water occurs during snow pack run-off, usually from May through July. The best fishing is normally during August and September, just when lakes are in the doldrums. The river is closed to fishing from November 1 to June 30 and there are catch and release regulations for the entire stream. Although any angling method is allowed, the use of bait is not permitted. This allows children to use spinning rods. Most anglers on the Skagit River prefer to fly fish. 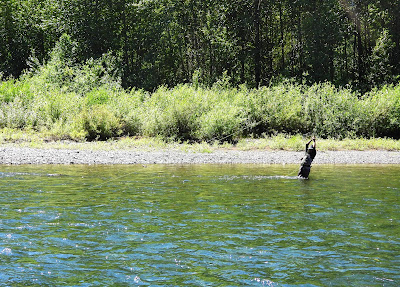 Many years before the Ross Reservoir was built, the Skagit river contained native cutthroat as well as rainbow trout and Dolly Varden char. Anglers took pack-horse trips from Hope and caught cutthroat trout to three pounds in the upper Skagit. After the dam was built, only the Dolly Varden and rainbows survived. The lake was stocked with domestic rainbow trout and these interbred with the wild strain. U.S. anglers caught huge numbers of fish in the reservoir and killed most of what they landed. Today, rainbows that have migrated up from the lake to spawn make up the bulk of the river catch. The few that take up residency are usually the larger fish in the river. A few huge dollies are also taken each season. They are commonly caught by spin fishermen, but the odd fly caster gets one on a streamer pattern. Big dollies often grab small rainbows that fly fishermen are playing 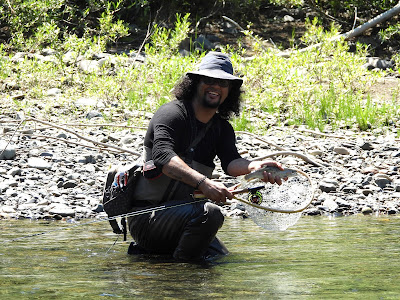 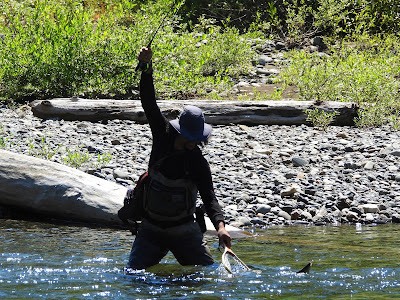 It is the fly hatches that make the Skagit special. Mayflies, caddis and stoneflies make up the Skagit trout's diet. During a summer hatch, trout can be very selective to fly and presentation. Often, very tiny flies are needed. The two exceptions are during caddis hatches and when Western Green Drakes are active. These large fat mayflies always bring trout to the surface. A dead drifted emerger pattern in the surface film is very effective. In late summer and fall, trout are more fussy. They move into the head of runs and feed almost entirely on nymphs. They can be taken on small beadhead fur body imitations. Often, the only rise is just at dusk. A seemingly barren pool during the day will come alive with rising trout in the evening. If there isn't an obvious hatch, these trout will be feeding on tiny, natural drifting mayfly nymphs in the surface film. Getting these trout to bite can be frustrating. Dead drifting size 16 and 18 emerger patterns is the answer. 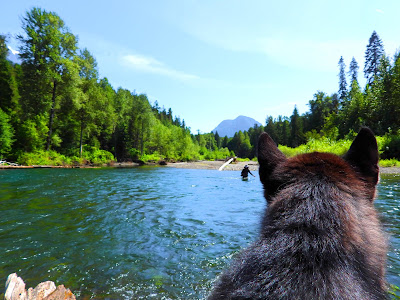 A few years ago a serious study was made of the Skagit Valley. A number of proposals were suggested: including paving the access road, developing and building more campsites, cutting more access trails, clearing log jambs and establishing park buildings. Fortunately, it was decided to leave well enough alone. Developing "wilderness" only ruins it. Hopefully, with continued good management the Skagit River will remain the fly fishing jewel of the Lower Mainland.

Skagit River - fly Fishing with Ebi Fisher
Posted by ebifisher at 2:54 AM