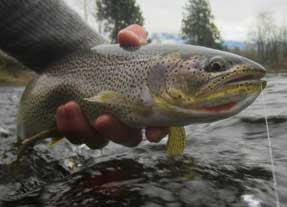 Habitat: Coastal cutthroat trout exhibit one of three forms. Non-migratory forms spend their entire lives within a specific small stream or headwater tributary. Freshwater migratory forms remain within larger bodies of freshwater, and migrate to spawn in smaller tributaries or lake outlets. Saltwater-migratory, or searun, forms migrate to the ocean in late winter and early spring to feed on crustaceans and baitfish before returning to freshwater late in the summer. Searun cutthroat trout can spend two to five years in freshwater before their initial seaward migration. Rarely found more than 160 kilometres inland from the ocean, these trout utilize a large variety of habitats, including saltwater estuaries, large and small river systems, sloughs, ponds, and lakes.

Description: Searun and freshwater forms of coastal cutthroat trout differ in appearance. In freshwater, these fish have dark green to greenish-blue backs, olive-green upper flanks, and silvery lower flanks and bellies. They also display numerous spots on their sides below the lateral line, with irregularly-shaped spots on their dorsal, adipose, and caudal fins. In saltwater, and shortly after returning to freshwater, searun trout are silver in colour with bluish backs, yellowish lower flanks and fins, and a minimal display of irregularly-shaped spots. Searun cutthroat have distinctive red or orange linear marks along the underside of their jaws. Cutthroat trout can generally be distinguished from rainbows by the presence of teeth at the base of tongue, and a maxillary (jaw) that extends beyond the posterior edge of the eye.

Fishing: Coastal cutthroat are efficient predators, but can be difficult for anglers to catch.
One of the best ways to target these fish is to locate a school of feeding fish. Searun cutthroat can weigh up to two kilograms, while freshwater resident fish are typically much smaller. When in freshwater during fall, winter, and spring, target coastal cutthroat with fly gear, spoons, spinners, or bait. 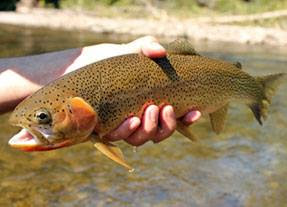 Habitat: Westslope cutthroat can be found in big rivers and lakes as well as small, high-elevation mountain streams. They have a strict requirement for cold, clean water, and good stream cover. Because westslope cutthroat have evolved in isolation from other trout species, they are a poor competitor in systems where species like rainbow trout and brook char are introduced. They are opportunistic feeders, aggressively pursuing whatever is seasonably abundant. They will feed on most invertebrates underwater, as well as flying or terrestrial insects that land on the water’s surface.

Fishing: Westslope cutthroat are typically small compared to other trout, occasionally reaching upwards of 50 centimetres. What these trout lack in size, they make up for in tenacity when hooked. The pristine waters in which westslope trout occur also tend to have low food productivity, which provides angling where few, or no other, sport fish occur. Depending on the water body, westslope cutthroat are available almost year ’round to anglers. While they are highly popular with fly-fishers in both streams and lakes during warmers months, they also support ice fishing on lakes in the winter. 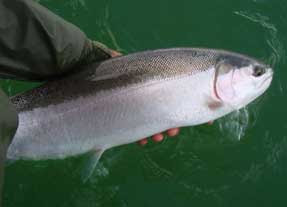 Origin: Located approximately 50 kilometres east of Merritt on the Thompson Plateau, Pennask
Lake lies within the Upper Spahomin watershed. Although the lake has low productivity, it has always maintained a large monoculture (single-species) population of small rainbow trout (Oncorhynchus mykiss). A permanent egg-collection station has operated on Pennask Creek, the major inlet stream, since 1927.

Habitat: Pennask Lake is naturally devoid of other fish species. As a result, the trout’s natural prey are mainly aquatic and terrestrial insects. Since Pennask rainbow trout have evolved in this environment, they grow and survive most successfully in highly productive (food-rich) monoculture lakes of the Plateau area where they do not have to compete with other fish species. Within any lake, this strain is pelagic, preferring deep open water. Another key trait of Pennask Lake rainbow is their exceptional ability to conserve body fat. This allows them to survive long winters, and makes them ideal for stocking cold, high-elevation lakes.

Description: Rainbow trout in Pennask Lake are generally small at maturity. However, when stocked into productive monoculture lakes, they grow well and reach a much larger size before maturity. Typical for Interior trout, these fish are lightly spotted on the body, mostly along the back and tail.

Fishing: Most active at dusk, Pennask rainbow are mid-water foragers that feed primarily on benthic (bottom) organisms like chironomid pupae or cladocerans (water fleas). The trout are not highly piscivorous (fish-eating), and show no evidence of preying on non-salmonid fish until they are at least two years old. Pennask rainbow trout have a reputation for being very aggressive, and are world-renowned for their fighting ability and tendency to jump when hooked. And, because this strain focusses on invertebrate prey, experienced fly-fishers often prefer the Pennask rainbows to other strains of stocked rainbows. 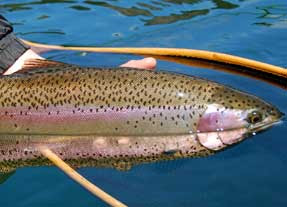 Habitat: Adapted to rivers, Blackwater trout in lakes tend to prefer shallow shoal areas that mimic a stream. They thrive in environments where they’re in competition with other species, and are more aggressive than many strains of trout. As a result, they are better suited for lakes with non-salmonid fish populations or a high proportion of shoal area. While Blackwater rainbow trout can be stocked into many different types of lakes, because of their potential migratory nature, they are usually stocked into lakes with no accessible outlet streams.

Description: The Blackwater strain is often more densely spotted from head to tail than the Pennask strain. They typically have a high concentration of spots above the lateral line, a body-spotting pattern that’s common in coastal rainbow trout. Blackwater rainbows grow quickly in lakes with varied sources of food and can get very large. Their girth is often much thicker than other wild strains.

Fishing: Blackwater trout typically prefer large prey like dragonfly nymphs, snails, and molluscs. After their first year, they may begin feeding on small, non-salmonid fish. Once they’ve reached maturity, they demonstrate a strong preference for feeding on fish. Their voracious, shallow-water foraging behaviour allows anglers to target them more easily than many other strains. Combined with the strain’s rapid growth, this makes Blackwater rainbows a favourite among knowledgeable anglers. 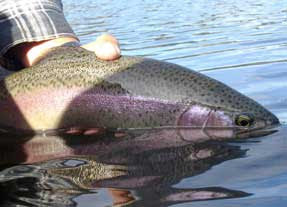 Origin: Unlike the Freshwater Fisheries Society of BC’s other strains, Fraser Valley rainbow trout (Oncorhynchus mykiss) are a purely domesticated variety. The strain was first developed during the 1940s at a trout hatchery in Tacoma, Washington. The Society purchased broodstock in the 1960s, and moved the fish to our Fraser Valley Trout Hatchery. In 2011, we relocated the broodstock to the Vancouver Island Trout Hatchery in Duncan. The stock is often referred to as the “McLeary strain” in honour of Ed McLeary, who was a key figure in establishing the program.

Habitat: This strain is typically used to stock urban lakes for our “Fishing in the City” program. Because their fast growth rate allows them to reach a significant size by late summer and fall, Fraser Valley rainbow are also used extensively in lakes that are prone to winter kill. Critical in waters where there’s the potential for interbreeding with wild fish, only sterile Fraser Valley progeny are stocked.

Description: Fraser Valley rainbow are heavily spotted above and below the lateral line, and on the caudal (tail) fin. They grow quickly and will typically have a large girth compared to other strains. Raised on an artificial diet at the hatchery, once released they adopt a wild-strain diet of various invertebrates. They are most successful when stocked into productive lakes and can get quite big.

Fishing: Fraser Valley rainbows are extremely aggressive, and aren’t generally wary of predators. As a result, they can be caught on a wide variety of fishing gear, and are an ideal target for kids and inexperienced anglers. Although they aren’t known for jumping, the size and strength of Fraser Valley rainbows can make for a very good fight. 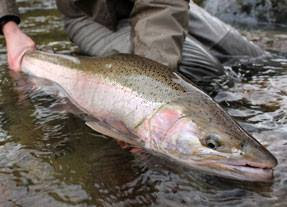 Origin: While steelhead (Oncorhynchus mykiss) are the same species as freshwater rainbow trout, these fish will actually spend a portion of their life cycle in the ocean. Some steelhead, mostly females, will also spawn in successive years. An individual fish can live up to nine years. Steelhead adults are collected from various Lower Mainland rivers, and are spawned at the Fraser Valley Trout Hatchery.

Habitat: There are two distinct runs of steelhead. Summer-run steelhead return from the ocean from April to October, and spawn in the spring. Winter-run steelhead enter rivers from November to May, and spawn soon after. Both types of steelhead can be present in the same river. As the fry emerge in late spring, they migrate to cool, faster flowing, well-oxygenated water. Older juveniles tend to inhabit areas of a stream that provide well-oxygenated water, and protection from predators. Upon reaching the ocean, steelhead move rapidly offshore, and migrate along the coast from northern California to the Gulf of Alaska while feeding on various baitfish.

Description: Steelhead have the same general appearance as rainbow trout. When adult steelhead begin migrating into freshwater to spawn, they are typically silver with heavy spotting above the lateral line. They will begin to develop blue-olive green colouration with a pink hue that runs from the gill plate to the tail, which will turn dark red as they approach spawning. Steelhead are distinguished by their streamlined body shape and large square caudal fin, which is only mildly forked. Steelhead can grow quite large, in rare cases reaching as much as 18 kilograms.

Fishing: Due to their strength, beauty, and acrobatic performances, steelhead are considered one of the top freshwater game fish in North America. They can be targeted with a variety of fishing gear that includes flies, spoons, spinners, jigs, and bait. These fish can be elusive and hard to catch. Landing a steelhead is an experience that isn’t soon forgotten.

Posted by ebifisher at 5:01 AM No comments: